Ch 22 Sakyubasu ni Tensei Shita no de Miruku o Shiborimasu (Because I Reincarnated as a Succubus, I’ll Squeeze Out Milk)

~ What has gone before ~

· I am taking a bath with my older sister. (※ blindfold SM play)
· For some reason the hero(ine) has come to be trusted by his/her older sister (explanation to follow).

"Judging people on their outward appearance is a silly, even dangerous thing to do." Sumirena-san explained. "When you've been dealing with customers for as long as I have you learn to observe people accurately and make your decisions on how to deal with them on that basis alone."

I listened carefully to my more experienced elder sister, grateful for her words.

"No-one alive doesn't try to cheat or exaggerate somehow in front of others." Sumirena-san said dismissively. "The way they dress, the way they speak, their posture, mannerisms, whatever they can use to raise their value in other people's eyes even a little, I've seen it all."

Most young people like myself wouldn't know this sort of thing so when I heard Sumirena-san explain how she observed people around her I could only listen silently and nod in agreement.

"Women are especially deceitful, skilled at putting forward a false appearance so if you're not aware of this and don't view them critically then you will certainly be misled." She paused. "However in Richy-chan's case you were too honest to be true so I wrongly suspected you of having ulterior motives."

"Don't apologise. To tell you the truth it's refreshing to come across someone who doesn't put on airs or present a false front to me. I'm tired of dealing with that sort working in the tavern day after day... the fact is I worry that I might turn into someone like that myself if I'm not careful. Is it really that simple?"

Sumirena-san told me a little about their parents' death. She wasn't specific when this happened but it was why,  at twenty years old she was working in the tavern with just Erim for company. My inexperienced hikikomori self couldn't imagine how hard life had been for her. I felt a fierce determination to lighten their burden if I was going to live here. What could I do to help though?

"Sumirena-san, will having me staying here with you make you feel better?"

"Of course. I'm feeling better already. Having Richy-chan staying here is very soothing." Hearing her say that brought a warm feeling to my heart.

"But you were suspicious of me before, convinced I was a conniving would-be freeloader, what changed your mind about me?" I was still puzzled about her abrupt decision to accept me into her home so wholeheartedly.

"Well I did think that way earlier, I must admit but what I saw of you convinced me otherwise."

"As I told you before everyone, and especially women, take care to appear well-groomed to others but in Richy-chan's case it was different. You hadn't enhanced or tidied yourself, it was a purely natural appearance with no womanly artifice. It looked stunning."

Did I look like that? When? Where? All Sumirena-san had done was to lift my skirt up after all.

"At first glance I sensed the delicate vitality that lurked amidst that golden shining wheat field, superior to the finest silk thread."

"W- what? You're being a bit too poetic for me... exactly what are you talking about?" I asked, intrigued.

"I've never heard it described like that!!" I burst out, offended. Wheat field? Silk? "And anyway what's the deal!? Do women really care about the appearance and shape of, of, that, ah, triangle-!?"

"Well, yes they do. After all they never know when a... companion might see it and leaving it ragged and untidy might spoil the mood."

"Stop joking and be serious for once!" I protested.

"Oh I am being serious. It was obvious at a glance, Richy-chan that you hadn't trimmed or styled your hair lower down but in your case it was so beautiful in its natural state that it displayed a visual dynamism unique in my experience."

"Please stop, I don't want to hear this!" I begged but Sumirena-san would not be deterred.

"Anyway that's why I trusted Richy-chan after a single glance."

"And that's the only reason you trusted meeee!" I couldn't believe what she had said.

"Don't be depressed, Richy-chan, it's pointless to worry about such things." Sumirena-san chided me. "I'm really pleased that I met Richy-chan and I'm sure Erim is too. My secret dream of having a younger sister has come true."

"Dream? Did you wish to have a younger sister who's actually a guy?" I protested.

"You're a guy? Really? You've got the pubic hair of a beautiful girl that's never been touched by a razor and you say you're a guy?"

"I'm feeling dizzy, let me go!" I wanted to escape.

"No chance, Richy-chan, don't be so hasty." Sumirena-san said with a laugh. " We've not even got into the bathtub yet, you can't be feeling light-headed already."

"Hiiii!!" I was in big trouble. This woman, I was coming to realise, was the most perverted person I had ever encountered by far. I tried to stand up to escape her clutches but Sumirena-san suddenly hugged me from behind. It was like a violent earthquake. A squishy soft sensation, TWO squishy soft sensations pressed into my back. Okay they were quite small breasts compared to my own Succubus-sized breasts but they were breasts, a woman's breasts, a real woman's breasts that weren't my own breasts...

"Wait- Waaaaaaaaa!! Sumirena-san, it's not good to cling to me like that when you're naked! I- I can- I can feel theeeeeem!!!"

"Umu, aren't you the lucky one?" Sumirena-san teased. I thought she said she wouldn't do things like that. "Nice, aren't they? I'm only pressing lightly, just a little, don't be embarrassed."

"How can I not be embarrassed!? Sumirena-san, I can't be calm no matter what you say!"

"There there now, just settle back and enjoy it..." My landlady is a pervert, or did I forget to tell you? I tried to resist her embrace, twisting and squirming but it just made things worse with "those" pressing on my back sometimes firmly, sometimes softly and seemingly changing shape moment to moment. And then her hands came round to grasp my front... 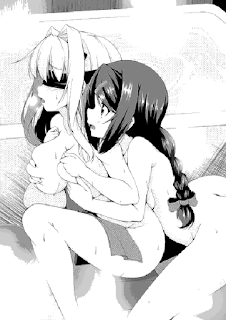 "This is bad, seriously, I'm telling you Sumirena-san! If I still had my man's body, surely...!"

"You'd be having an erection?" Sumirena-san guessed shrewdly.

"I'm feeling something I shouldn't be able to feel!" I cried, confused as Sumirena-san's hands kept moving over my body.

"That's very interesting." Sumirena-san's hands paused for a moment, something that was perhaps even worse than when they had been moving a moment earlier. "You don't have a male penis any more but you believe something should be getting engorged anyway from the stimulation you're experiencing. Hmmm... I suppose you could call it a phantom penis erection?"

"Please don't just make up words like that!" I objected. "Where would you use such a phrase anyway!?" What she had said brought pictures into my mind though, making things even worse for me. I could FEEL it now she had put a name to it...

"Richy-chan, don't you want to get used to having a woman's body as soon as possible?" Sumirena-san queried. "I'll work diligently with you to help you achieve this, so let's explore a little more." Her hands started moving again, downwards...

"Yaa, stop... No, not there... Ah, wait! Hold on... no, not that place! Not inside... Ahhhhhhhhhhhhhh, ah, hyaaaaaaaaaaaaaa!" In my mind I suddenly saw the image of a falling camellia petal.

At some point in my useless struggle I lost consciousness. I'm not sure but my cries of grief and anguish (which went on for the best part of an hour, if my memory was correct) must have inconvenienced the local neighbourhood's night-time rest.

When I woke up I was in a bed by myself. It seemed to be a private room prepared for me. It was a simple room with white wallpaper, furnished with only the bed and one small chest and a water jug and bowl. A thin peach colored curtain decorated the window. I could see starlight in a dark sky outside through a gap in the curtains. It seemed that not much time had passed since I had been brought here as my skin still felt flushed and prickly from Sumirena-san's earlier attentions. I was wearing simple pajamas, nothing more risque or revealing as I had feared. I vaguely remember that Sumirena-san brought me here after I fainted in the bathroom.

"I'm mega~~~~~~~~~~~~~~~~~~~~~ worn out..." I couldn't sleep but I was still exhausted from what had happened to me in such a short time. In one single day I had been killed, reincarnated, nearly raped (twice!) and then molested by an older sister (adopted). That's leaving out a whole raft of other things, of course -- for example I thought my features were monstrous and horrific but it turned out I was better looking than any gravure idol with a million-selling photobook. Waaay better looking. And before you say it, for the 17-year-old male hikikomori like me inside this body that's another minus point, not a plus.

Even now, lying in the bed staring at the ceiling my heavy breasts pressed down on me disturbingly, preventing me from sleeping easily. It was the first time in my life I'd tried to sleep with such massive objects on my chest constantly reminding me of their presence and it was not going well. My wings were crushed uncomfortably under me which was another source of distraction. I tried turning on my side but my horns got in the way, catching in the pillow and wedging my head up, straining my neck. The way my breasts slumped when I turned sideways didn't help either. Lying face down... squish. Nope.

"...I really want to quit being a Succubus." I muttered. Saying that though I wondered about my current Status. It made depressing reading when I made it appear before my eyes. My Job Title was still [ Unemployed ]. However...

What? My Level had risen from 1 to 2. How had that happened?

"...Surely I needed to have had sex to raise my level... That's what the receptionist at the Reincarnation Support Department said, anyway..." Maybe she had been bullshitting me, I hadn't had sex had I? The rape attempts hadn't succeeded after all. I gave up thinking about it as I finally drifted off to sleep at the end of my eventful first day in a different world.

Japanese isekai light novel translations. Fair warning -- what you get is my free-form interpretation of the original crappy Japanese.